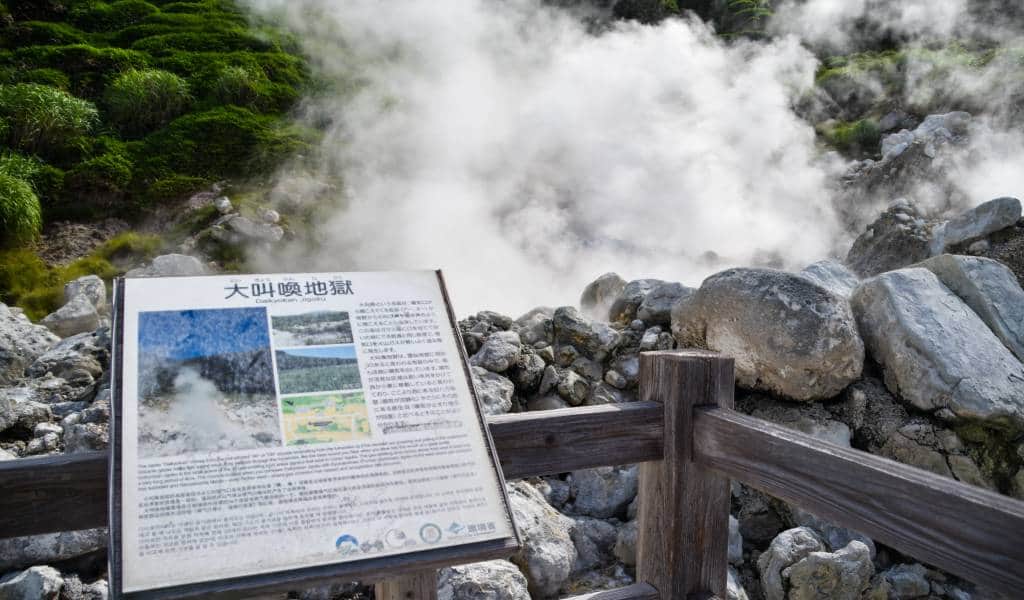 Japan is an understated outdoor lover’s paradise. The nation is home to 34 spectacular national parks that cover landscapes, from Okinawa’s bright sub-tropical islands to Hokkaido’s snow-dusted mountains. Unzen-Amakusa is the country’s first national park and still one of its most beautiful.

Unzen-Amakusa National Park is situated on the west side of the southern island of Kyushu, occupying Kumamoto and Nagasaki prefectures. It was initialy designated as a national park in 1934, predominantly covering the Unzen Onsen area in Nagasaki. The park was later expanded in 1956 to include the Amakusa region, an archipelago of 120 islands. It’s a relatively untouched landscape full of spectacular natural beauty and plenty to explore.

As mentioned, the park stretches over two prefectures, Kumamoto and Nagasaki, each with their own unique landscapes, cultures and appeals. It’s best to plan your visit across both to get a good look at this sprawling, rugged wonderland.

Sitting about 60 kilometers southwest of Kumamoto City, Amakusa is a coastal region that occupies a cluster of fascinating islands (some inhabited, some not) that stretch out into the Ariake Sea. Nagasaki is generally associated with the country’s hidden Christian community, and Amakusa is one of the key locations for this fascinating historical moment.

Amakusa is a little remote; however, from Fukuoka Airport, Amakusa Airlines runs a handful of flights to the area daily. Once you get to Amakusa, head to the newly developed Mio Camino tourist and adventure center, on the island of Maejima. It’s here that local companies, like kayak tour group Unplugged, offer opportunities to explore the landscape more intimately. Visitors can pick up a bunch of brochures (in English) and join a cruise or bike riding tour or have a go on the rock-climbing wall.

A fun fact that might be Cheapo noteworthy: Many of the smaller islands you’ll see around the Maejima coast located in a national park are for sale. If you have a spare ¥20–50 million, you can purchase an island, which, if you do the math, is pretty cheap to say you own an island. However, island owners are barred from building or modifying the islands because, of course, it’s part of a national park.

The coastline of this area of Kumamoto was one of the main reasons that Japan’s hidden Christian community flourished here. Head to the fishing village and historical relic Sakitsu to learn more about the development, exile, and rebuilding of the nation’s drought relationship with the “hidden Christian” (Kakure Kirishitan in Japanese) community. Initially, missionaries led by Francisco Xavier (1506–1552) made their way to this area to spread their message and utilize the area’s remoteness to convert some of the nation’s population.

In the Edo period, however, the government saw the practice of Christianity as a threat to the well-being and unification of Japan, socially, politically, and spiritually. Thus, Toyotomi Hideyoshi, a leading ruler at the time, banned Christianity outright in 1614.

Worshippers were forced to practice in secret following the ban, while missionaries were expelled from Japan. The government would visit the villages around this area and Nagasaki and would test the faith of the population who lived there. Residents were made to stand upon an image of Christian iconography (fumi) in a practice known as fumi-e.

Those who couldn’t renounce Christianity by stepping on the fumi would be forced to convert to Buddhism or even executed. Today, Sakitsu village is a reminder of this history, with its large Sakitsu church standing defiantly in the town’s center. The town is home to several tourist information spots where you can stop by picking up a map or two before heading off to explore the area at your pace.

Heading north across prefectures is the Unzen part of Unzen-Amakusa National Park. Along the Shimabara Peninsula, of which Unzen occupies a majority of its center, you’ll find a hellish landscape punctuated by lush pockets of green foliage. This area was a volcanic island 400,000 years ago and still, today, is home to active onsen pools. Some are as hot as 98° C or more, with heavy sulphuric steam billowing from the hillsides.

Unzen Onsen town is the area’s centerpiece and home to Unzen Jigoku, which in English translates to “Unzen Hells.” It’s an eerie name considering these open onsen pools were once utilized to execute Christian rebels.

Today, visitors can walk through the onsen fields on cautioned-off paths, and inspect the volcanic waters from a safe but still very steamy distance. But beware: The area is occasionally prone to a “new hell” opening here and there. Recently the ground near one of the town’s most central car parks gave way to a new onsen. On the plus side, this mineral-rich volcanic water source is also pumped into many of the town’s hotels and ryokans, making it an excellent place for a good relaxing soak.

One of the best ways to truly appreciate the landscape and naturally diverse beauty of Unzen Onsen is by trekking up one of the area’s many scenic mountains. Mount Fugen (locally known as Fugen Dake) is one of the highest and most rewarding hikes in the Unzen area, and while it can be challenging at times, it’s very doable for those with mid-level fitness.

It’s still an active volcano. In fact, Mount Fugen erupted in 1990. Its pyroclastic flows (superheated volcanic gases) and mudslides poured down the mountain towards Shimabara City, claiming lives and destroying property in its wake. The eruption also added to the mountain’s peak, which is easy to spot with the mountain now featuring a reddish rocky peak.

Today you can hike the new Unzen-Fugendake mountain trail (the old one shut down after the eruption). You can reach the beginning of the trail from the Nita Pass, which is accessible by car, or if you’re feeling super active, can be easily reached by an electric bike.

From Nita Pass, you’ll find the entrance to the Mount Fugen trail. We’d suggest you put aside about five hours to climb the mountain, allowing time to explore the landscape. Also, there aren’t many food options nearby, so be sure to pack a lunch and plenty of water. If you don’t feel like hiking, there are other ways to get to the top. From Nita Pass, you can take a ropeway to the nearby Mount Myoken.

Where to stay near Unzen-Amakusa National Park

For those looking to explore the area the way it should be explored, we’d suggest spending at least two nights (three days) in the Unzen Onsen area. The town is home to Shirakumo no Ike Camping Ground. The camping ground is open for overnight and day guests and costs ¥400 for adults and ¥200 for children. Camping rental is available too. Visit the camping ground’s website for more information.

For something a little more luxe, there’s also Shinyu Hotel, a ryokan facility where modern ideologies, design elements, and consideration with traditional Japanese omotenashi hospitality meet. Currently, it’s run by the fourth generation of ryokan proprietors, and the facility prides itself on being a female-run and managed business.

Shinyu blends contemporary considerations, like the eco-friendly products in the bathroom, Western-style beds, and mid-century modern furniture, which fills out the classic Japanese-style rooms. There are also public onsen available, necessary after a long day of hiking.

How to get to Unzen-Amakusa National Park

To reach Amakusa, take Amakusa Airlines from Fukuoka Airport. There’s a shuttle bus from the airport into central Amakusa City, and it takes about 15 minutes (¥350 each way), but to explore the area in more depth, you’ll have to get around by taxi or rental car.

To reach Unzen Onsen, there are hourly buses from Shimabara Port. The journey takes around 40 minutes. There are also buses from Shimabara Station and Isahaya Station. There are infrequent buses that travel directly to Nagasaki, and the journey takes about an hour and a half each way. Once in Unzen Onsen, it’s relatively easy to explore on foot and rental bicycle. Visit the Unzen Visitor Center for more info on where to catch the bus.

Written by: Lucy Dayman
Filed under: Things to Do
Tags:
Sharing