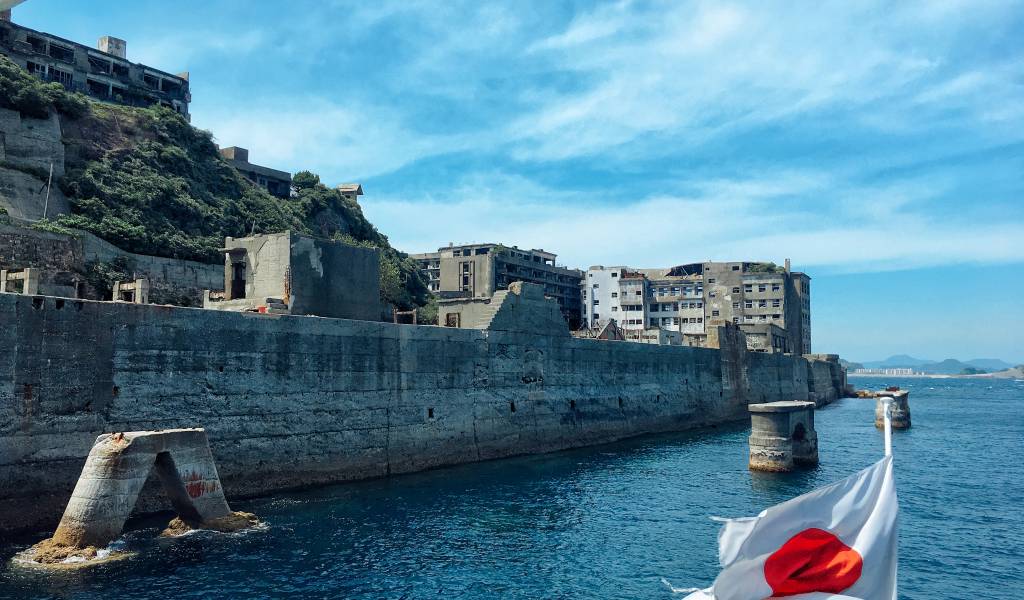 How to Visit Hashima Island (Gunkanjima or Battleship Island)

You’ve seen it in Skyfall and all over the media. Now a UNESCO World Heritage Site, the ruins of Nagasaki Prefecture‘s abandoned Hashima Island, better known as Gunkanjima (or “Battleship Island”), has attracted attention for its post-apocalyptic appearance.

What happened on Battleship Island?

As a world-class undersea mining operation, the island was once a symbol of Japan’s rapid industrialization. Bought by Mitsubishi in 1890, the previously uninhabited island was transformed with modern buildings and conveniences. These included early examples of concrete apartment blocks and electric lighting. By the 1950s, the population had swelled to as many as 5,000 people, attracted by solid wages and the unique mining culture. As coal power gave way to gasoline, coal prices fell, and many mines, including Hashima, were permanently closed. By 1975 the island was completely evacuated.

An abandoned Japanese island with a shady past

Hashima Island’s increase in popularity and status as a World Heritage Site, though, has not been without controversy. What many don’t know is that the island had a history of forced labor before and during World War II. The terrible conditions and unsafe environment led to untold suffering—along with as many as a thousand unrecorded deaths. Tour companies are often reluctant to talk about this, leading to suggestions that those in power are attempting to rewrite the island’s history in a more favorable light.

At the time of writing, Gunkanjima had no memorials to the victims of forced labor. Japan has pledged to set up a memorial and an information center in the years to come.

From local eyesore to world-famous attraction

Thanks to a total ban on visitors, Hashima was left to be reclaimed by what little nature remained—and remained practically untouched for decades. The eerie atmosphere of an industrial town where people seemingly disappeared mid-lunch eventually caught the public eye, and brave individuals started slowly but surely exploring and taking photos. With crumbling ruins, not to mention abandoned mines, unregulated visits were an accident waiting to happen. Perhaps to combat this danger, official guided tours were eventually introduced.

Since the Japanese government lifted the ban in 2009, the island has become a popular destination for visitors to Nagasaki and Fukuoka. To cater to demand, several companies have begun offering guided tours, starting from Nagasaki Port. Prices range from about ¥3,900–¥5,100.

If you want to visit Battleship Island, here are some things to know beforehand.

1. You can’t visit Hashima Island on your own

Safety first is the key principle here! It may be one of Nagasaki’s top things to do, but the buildings on the island really are at risk of crumbling, and no one knows when, so the government has mandated that tourists can only visit as part of a sanctioned group. Unless you’re in journalism or media in general, sorry, that solo trip just isn’t happening. If you’re interested in visiting one of the many more accessible and less abandoned port towns while you’re in Japan, be sure to read our handy guide.

Gunkanjima is surrounded by treacherous waters. The sea is harsh, and even a slightly rainy, cloudy, and/or windy day is enough to set off the waves and impede visibility. Consequently, cruise companies reserve the right to cancel tours due to bad weather, even on the day of the tour itself or while you’re aboard the ferry.

Don’t worry; you’ll usually get a full or partial refund and/or something else to not waste your efforts, such as a replacement tour or a decent souvenir. In any case, just keep in mind that there’s always the risk of the tour not pushing through for reasons beyond human control. For reference, Yamasa Shipping’s website mentions that on average, the number of days in a year that tours successfully push through is around 100.

3. Gunkanjima is not for the faint of heart

See the above point on Gunkanjima’s waters. More than the cost, the major obstacles to visiting Hashima Island are inclement weather and health.  If you’re prone to seasickness and motion sickness, this probably isn’t the tour for you. On a particularly rough day, even those who don’t easily suffer from those conditions may also feel unwell.

I don’t get motion sickness easily, but there were several times when I felt like throwing up, and I finally did during the ride back. Having anticipated that guests might feel uncomfortable on the journey, the staff distribute towels, candy, vomit bags, and even a wristband that’s supposed to help combat motion sickness, but those still weren’t enough for me. (They don’t sell anti-motion sickness medicine, though, so bring your own just in case.)

If these don’t discourage you, then good for you, but just remember that your health is more important than any tour, however awesome it may be. In my case, it was a short but memorable experience, but would I do it again? I don’t think so, because of the bumpy ride!

4. You may be refused admittance based on your physical condition

This isn’t because of discrimination, but again, it’s for safety reasons. The tour companies we listed don’t reject reservations from pregnant women, as well as people with disabilities and chronic illnesses. However, harsh weather conditions and other unforeseen circumstances could still lead to pregnant women suddenly being barred from joining a tour.

Moreover, ferries are not wheelchair accessible, and Gunkanjima isn’t a wheelchair-friendly location, either. Those with serious chronic illnesses are also discouraged from joining. It’s best to inform the tour companies beforehand about any physical conditions you have, just so you have an idea of whether you can go ahead with that reservation.

Read more about Haikyo as an exploration of Japan, past and present

5. Newborn babies and pets are not allowed on board

We’re not sure why anyone would think of bringing a baby or a pet to a tour like this, but if you’re thinking about it, don’t. While the tour companies’ FAQs don’t mention banning babies that aren’t newborns, we really don’t think it’s a good idea to take babies or small children along on a tour of Hashima Island.

6. Tour companies will make you sign a safety contract

You have to agree to follow their rules, which are basically common sense anyway: don’t join the tour intoxicated; don’t go off on your own upon disembarkation (yes, following the guide is really important—they need a license to conduct those tours so they know better)—things like that.

It’s an entrance fee imposed by the local government, and it goes to the preservation of Gunkanjima. You pay this to the tour company. Note: the prices quoted in this article include the entrance fee.

8. The tour on Hashima Island is only 60 minutes long

Again, this is a government-mandated thing, and is for everyone’s safety. You’ll follow a guide down a prescribed route and stop for photo ops here and there. You won’t really see much of the island, but you’ll at least get a glimpse of the urban decay. And no, you can’t get close to, let alone explore, the ruins. Safety first, remember?

Yes, the round trip to the island takes longer (as a one-way trip is, at most, an hour long), and while this may be a let-down for some, keep in mind that there’s no other way you can see Gunkanjima. It’s not like it’s some tourist spot in Tokyo, Kyoto, or Osaka that’s easy to get to. For less than ¥5,200, a 2.5- or 3-hour tour of an abandoned island doesn’t sound so bad, does it?

The island was famously featured in Skyfall as the lair of Raoul Silva—a former MI6 agent gone rogue. In reality, the abandoned island just inspired the eventual design of film, which was actually shot in Macau. So while the reputation for villainy stands out for tourists, only external shots were ever shown in the film. The island was however used as a filming location for the less-acclaimed Attack on Titan film, back in 2015.

All of these are licensed—so don’t worry, you’re in good hands. Depending on the comapany, you might also see tours listed for “Battleship Island”, “Abandoned Japanese Island, “Skyfall Island” or “Ghost Island”.

Departing at 9:00 am and 1:00 pm (with tours being suspended in January and December), Yamasa’s tours are 2 hours and 30 minutes long. At ¥4,510 for adults (those aged 15 and above), it’s the priciest among the three options, although there are discounts for children and groups. There’s a quick explanation in English, but most of the tour is conducted in Japanese. Here are some things to take note of:

You start by meeting in their office at Tokiwa Terminal, which is close to the Ourakaigandori stop of the tramway. Prices are ¥4,310 (¥4,000, plus the ¥310 entrance fee we mentioned earlier) for adults, with discounted prices for students aged 14 and younger, as well as groups of at least 15 people.

They offer two tours a day, at 10am and 1:15pm (assembly time is 25 minutes before departure, but it’s best to arrive earlier), and provide audio guides for foreigners. (The tours are conducted in Japanese.) If your tour gets canceled, they’ll take you to an area from which you can see Hashima Island.

Gunkanjima Concierge allows the chronically ill to join their tours, but a medical certificate proving that the guest is fit to travel on sea is required. Again, it might be extremely difficult to provide emergency medical assistance, so consider this carefully if you have a chronic illness.

Cruises depart from Motofuna Pier, which is a short walk from the Ohato tram stop, at 9:10 am and 2:00 pm. Be sure to arrive at least 20 minutes before departure for pre-departure procedures such as registration and payment. Tours cost ¥3,910 for adults and ¥1,950 for children; the mode of payment is strictly cash. Tours are conducted in Japanese.

You may be wondering: where exactly is Nagasaki, anyway? It’s in Kyushu, in southern Japan. There are few international flights to Nagasaki, but they’re not cheapo options, so let’s focus on the affordable ways to get there. If you’re coming from another country, it’s best to land somewhere else in Japan, then take a domestic flight, bus or trains.

Both Japan Airlines and All Nippon Airways have discounted fares for foreigners who can show proof of residence outside Japan and a ticket back home: ¥5,500–¥11,000 one-way for domestic flights.

If you want to go even cheaper than that, go for the budget airlines. Starting around ¥4,000 one-way, Peach Air flies to Nagasaki from Osaka’s Kansai International Airport. The journey is just over an hour. Alternatively, you can fly to Fukuoka via Peach or Jetstar from Kansai (about 1 hour, also for around ¥4,000 one-way for Peach) or Tokyo (about 2 hours, starting at around ¥5,000 one-way), then take a 2-hour bus (for about ¥2,500) to Nagasaki. See our article on getting to and from Nagasaki Airport for more.

There are also overnight buses from various areas in Kansai, and trains are another option, especially if you have a JR Pass.

Making sure you have the right island

We’ve seen quite a few mis-spellings online for Hashima. The most common is “Nashima”. Presumably people are getting it confused with the famous art island of Naoshima.

While we do our best to ensure it’s correct, information is subject to change. This post was first published in March, 2015. Last updated by Felix Wilson in June, 2019.