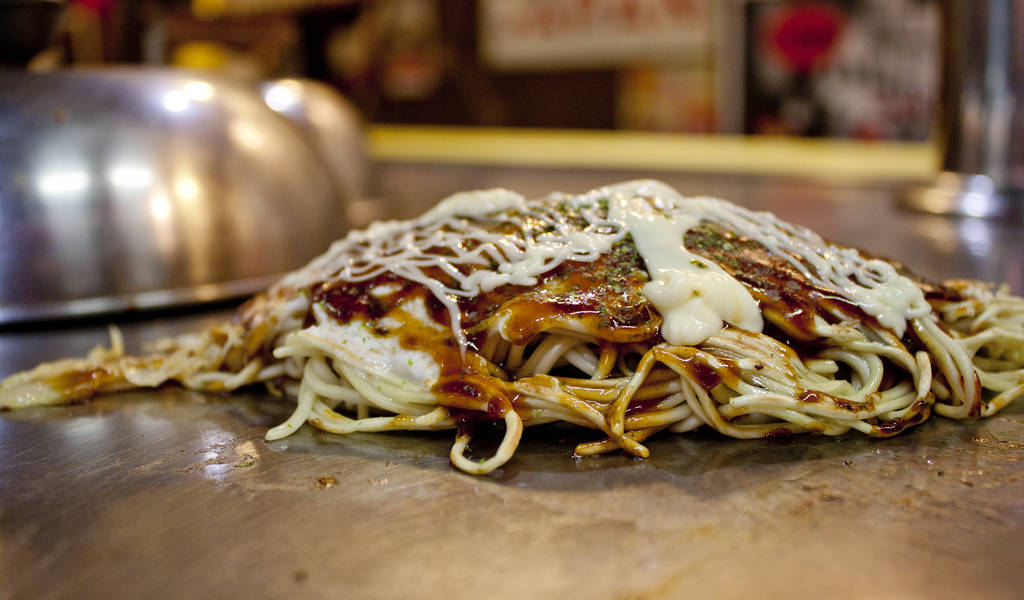 Okonomiyaki: The History of Hiroshima's Soul Food (and Where to Try Some)

Hiroshima may not be the first name that jumps to mind when you think of eating out in Japan, but it could be. The coastal city is home to one of the world’s finest comfort foods, a great big serving of crunch and umami: the okonomiyaki.

Hiroshima okonomiyaki has shredded cabbage, paper-thin pork belly, and sticky-sweet sauce in common with its more northerly sibling, the Osaka- or Kansai-style okonomiyaki. While you could technically get away with cooking your own Osaka-style, the Hiroshima version is a more complicated proposition. (And do not confuse either of these with their Tokyo cousin, the much runnier monjayaki.) Crepes, eggs, sprouts, pork, cabbage, noodles (soba or udon) and regional variations like octopus and oysters are carefully layered for the Hiroshima dish.

Because of the complex construction that takes place and the way the ingredients behave on the grill—most Hiroshima okonomiyaki chefs still go through years-long apprenticeships—you won’t be cooking it yourself, but chances are you’ll be seated along the teppan (metal griddle) with a view of the action. We mean it: you’ll be sitting right next to a sheet-metal surface heated by a bunch of gas burners, so shed that coat before sitting down or you’ll wilt just like the cabbage. And don’t put your elbows down on the hot metal. (#LearnedTheHardWay).

Okonomiyaki got its start in the early 1900s as issen yoshoku—”one-sen Western food”: a crepe rolled around cabbage and sprouts, a cheap snack for schoolchildren. But the dish the way we know it now has roots in Hiroshima after WWII, when the city was rebuilding itself. Teppan grills were the easiest thing to make, and the Allies brought in surplus wheat supplies. Result: pancakes with cheap, nutritious fillings. The first okonomiyaki restaurants opened in the later 1940s, and quickly became the cornerstone of the city’s food culture.

Part of this is thanks to the Otafuku Sauce Co., which not only makes pretty much all of the okonomiyaki sauce ever (like seriously, ever) but provides business training and support for new okonomiyaki joints to start up. For the food nerds among us, Otafuku started out as a Hiroshima rice-vinegar company that expanded into Worcestershire sauce after WWII. Okonomiyaki cooks complained that Worcestershire was too spicy and thin and didn’t cling, so the company thickened it with fruit. And lo, okonomiyaki sauce was born.

Where to try Hiroshima-style okonomiyaki

Hiroshima has over 2000 okonomiyaki restaurants, but 25 of them are situated in one building, the four-story shrine to soul food Okonomimura in Naka-chu, a bustling, friendly, resolutely unfancy space that greets you with a whack of savory steam as you push in through the curtain. There’s something about okonomiyaki that soothes even the most savage bad mood—you can’t stay unhappy when you’ve got a tower of crispy, egg-draped umami goodness in front of you.