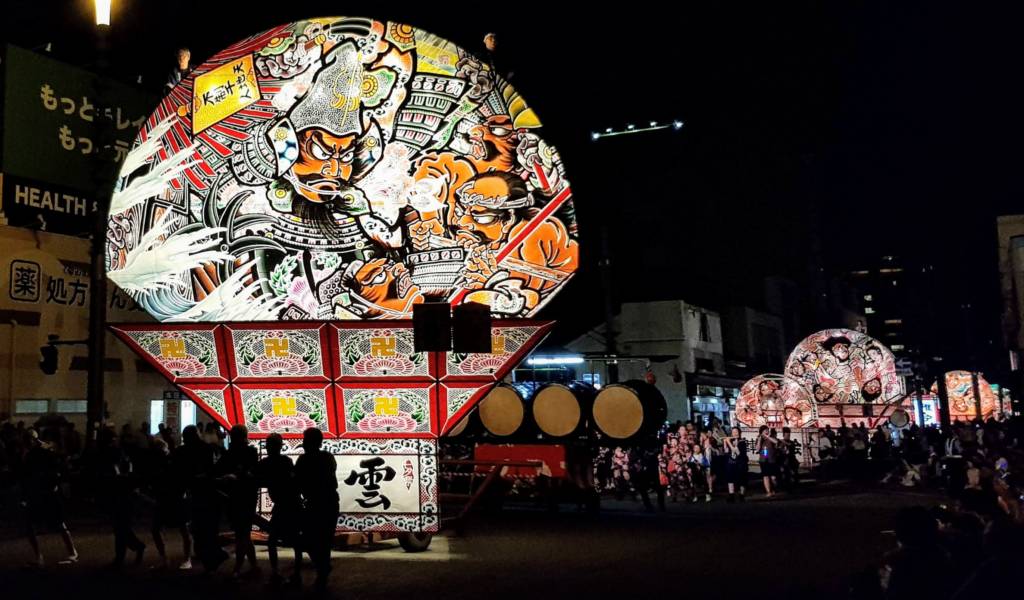 Hirosaki Guide: Japan in a Nutshell

At first glance, Hirosaki might look like just another small provincial Japanese city, rundown even, but there’s something special here and the locals will tell you forthrightly in one succinct but scattered sentence – castle town of apples, cherry blossoms and Neputa.

Hirosaki is at the heart of the Tsugaru Plains to the south of Aomori City in Aomori Prefecture. It’s a long way from Tokyo and it’s a long way north. Winters are harsh with heavy snowfall and the summers relatively short. A good proportion of famous sumo wrestlers come from here. The wrestlers are a lot like the rest of the locals. They’re unpretentious, earnest, hard working and they like to drink. It’s not a town short on culture though. Dazai Osamu – one of Japan’s most celebrated novelists and modern pop artist Yoshitomo Nara both hail from Hirosaki.

Although the cult of meibutsu (something famous that comes from a certain area) means you should be fascinated with apples, to the foreign eye, there’s nothing particularly of note. The apple trees add an interesting touch to the landscape – each apple individually wrapped on the tree – but no matter how much apple wine, apple pie, apple waffles, apple candy and apple soup you try it’s difficult to get past the fact that they’re just apples. Of more interest to the visitor, is the quaint castle, temples, Mount Iwaki, the interesting blended architecture, the folk art, the raucous tsugaru jamisen music and the various winter, spring and summer festivals.

The city is split by the Ou Main Line which runs from Akita to Aomori City. The tallest buildings and the main shopping areas are to the west and northwest of Hirosaki Station. The castle is located a 20 minute walk west northwest of the station, while the affectionately regarded Iwakisan (Mount Iwaki) looms further to the west. The modern city holds little of interest, most buildings being of the bland concrete, tile and glass box variety. To the south of the castle grounds is the three storey former Hirosaki Municipal Library, an interesting example of Meiji-era Japan architecture – an effort by the government of the time to adopt Western architecture. Constructed of wood, this is a very rare sight in Japan – where similar buildings were destroyed by conflagrations due to World War 2 firebombing. Admission to the building is free.

If you’re after a temple fix, then head to the Zenrigai district. Lining the street are 33 Zen temples intended to spiritually guard Hirosaki Castle. As is usually the case in Japan, temples are constantly rebuilt rather than being left to decay, so you may see traditional craftsmen working on one of the temples using the same techniques that have been used for hundreds of years. Also of special note is Saishō-in Monastery with its 5 storied pagoda built in 1667.

Hirosaki has perhaps the cutest little castle in Japan. Long before its construction in 1810, a much larger structure stood in its place, but like so many castles in Japan, it burnt to the ground when struck by lightning in 1627. Although diminutive, it is genuine – not a concrete reconstruction with air conditioning and light switched.

The castle is situated in the middle of Hirosaki Park, surrounded by inner and outer moats. From the first of April through to the last week of November, the area surrounding the castle has an entrance fee of ¥310 for Adults and ¥100 for kids. During the winter months, entry is free.

Located opposite the north east corner of Hirosaki Park, Neputa Mura (village) is named for the famed festival which takes place in Hirosaki in August each year. It is something of a tourist trap, but if you’re not in town for Neputa, it’s your best bet to see one of the floats. There are also floats that predate Neputa and displays of local crafts and tsugaru jamisen (like a banjo played with a spatula) performances. Entry is ¥550 for adults, ¥350 for middle and high school students and ¥200 for younger kids.

The way Hirosaki residents talk about it, you’d think Neputa (not Nebuta! – that’s the spelling in Aomori City) was a month long festival. Alas, it lasts for only a few days in August. Although not as rowdy as the Aomori version, it is rowdy enough that a participant fell and was crushed to death by a float in 2014, meaning the rest of the festival was cancelled for the first time in memory.

If you’re not lucky enough to be in Hirosaki at the start of August, you can still visit Neputa Mura as mentioned above.

Japan loves lists. According to the list compiled by the Japan Cherry Blossom Association, the trees at Hirosaki Park around the castle are in the top 3 in the whole of Japan. Due to its northern latitude, the sakura arrives in Hirosaki about a month later than it hits Tokyo and Kansai, so the cherry blossoms are in full bloom towards the end of April and the start of May.

One thing that Hirosaki has no shortage of in winter is snow. Towards the end of winter, snow piles up up in dirty mountains all around the city. While the snow is still plentiful and pure, it’s put to good use in this festival at the start of February around Hirosaki Castle.

With it’s abundant surrounding countryside, Hirosaki restaurants make excellent use of local ingredients (there’s apple flavoured everything – except during cherry blossom season when there’s cherry blossom flavoured everything). Despite its inland location, Hirosaki is still only a quick trip from the coast, so it also has some of the best, freshest seafood that I’ve tasted.

A good place to enjoy some local fare as well as a Tsugaru Jamisen performance is at Tsugaru Jamisen Live Aiya. They serve traditional local dishes, izakaya favourites like edamame and an all you can drink course. Twice each evening – at 7pm and 9pm there is a rousing tsugaru jamisen performance. The restaurant is family run, so sometimes you can see different generations performing. Although the situation has improved, there is still not much to do in Hirosaki after dark aside from eating. A small craft beer scene has recently appeared with two breweries/brew pubs of note – Be Easy Brewing (a brewery with a tasting room) and Gareth no Ajito (a brew pub). During the warmer months there is also an beer garden-like terrace in the middle of a modern shopping complex called Gochiso Plaza on the main Dotemachi shopping street.

For no frills functional accommodation, the Toyoko Inn Hirosaki Ekimae and Hotel Route-Inn Hirosaki located directly in front of Hirosaki Station are both good budget options.

Getting There and Getting Around

If you’re on a Japan Rail Pass, you can take the Tohoku Shinkansen up to Shin-Aomori Station and then jump on the Ou Main Line train going to Hirosaki. The journey from Shin-Aomori to Hirosaki takes about 40 minutes. Domestic flights to Aomori Airport (strangely carved out of the top of a mountain) are not cheap. If you book in advance you can get a round trip from Tokyo for about ¥27,000. Highway buses are definitely the cheapest option, costing around ¥5,000 to ¥6,000 each way from Tokyo. Note that this is a really long trip – about 12 hours – so be warned!

If you’re a keen walker, you can get around most places when you’re there by foot. However, during summer months, the Tourist Information Office at Hirosaki station has bicycles for hire for ¥500 for the whole day or ¥1,000 for a power assisted bike. Because of the relatively short distances, taxis are also an option. Be careful though, Hirosaki taxi drivers speak the most unintelligible form of the local Tsugaru dialect so you won’t understand anything they’re saying – even if you speak Japanese. Also be aware that credit cards or electronic money may not be accepted – so ask before you jump in a taxi.

This article was first published in February 2015 and was updated in August, 2018.
Hirosaki (弘前市)
Aomori
Written by: Greg Lane
Greg's Japan favorites are: Hoppin’ on the Brew Wagon: Kanazawa’s Best Craft Beer Bars, 10 of Japan’s Most Impressive Castles
Filed under: Travel
Tags:
Sharing