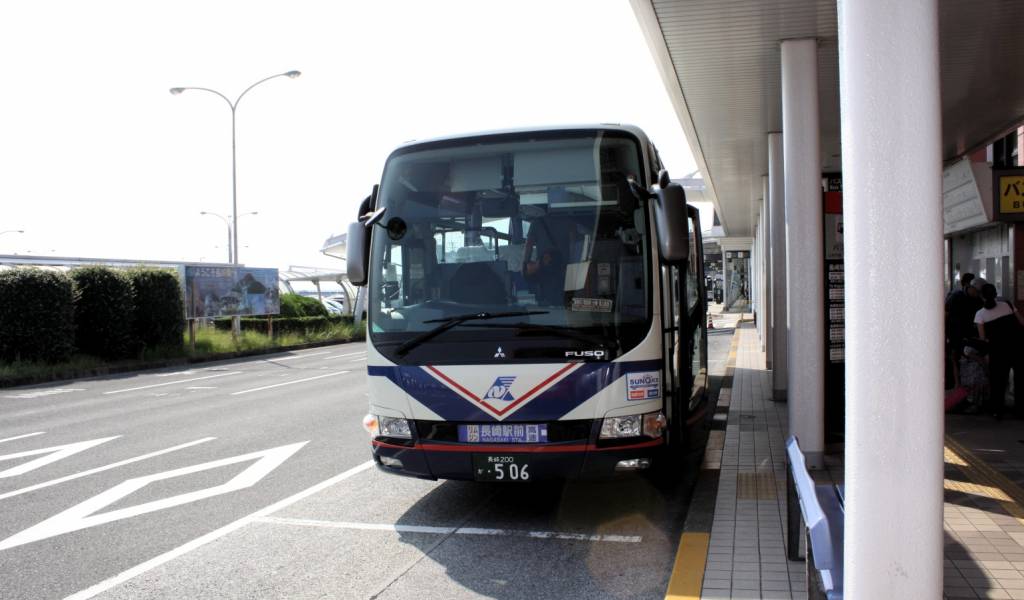 Getting from Nagasaki Airport to Nagasaki City

Nagasaki Airport is located on an island in Omura City only 18km (11 mi) from Nagasaki Station as the crow flies. However, the terrain of Nagasaki Prefecture is mountainous with lots of curly roads and tunnels, so the journey by road may take 45 minutes or more. There is also no rail connection to the airport, so your transport options are limited to road options. There are ferries too, but towards Huis ten Bosch and the ports of Togitsu and Nagayo, and not to Nagasaki City.

Buses from Nagasaki Airport to Nagasaki City leave throughout the day at intervals from 10 minutes to an hour from 9:15am until 9:25pm. Going from the city to the airport, the buses run from 5:50am until 6:50pm. The trip to Nagasaki Station takes about 55 minutes and costs ¥900. Before arriving at the station the bus also stops at the following stations: Showa-machi, Sumiyoshi, Ohashi, Matsuyamamachi, Hamaguchimachi, Urakami and Cocowalk Miraimachi. On the way from the city to the airport it stops at the same places with the exception of Cocowalk Miraimachi.

Matsuyamamachi is right next to Nagasaki Peace Park and the Atomic Bomb Museum. If you’re headed towards Dejima and the former foreign settlement area then you should go all the way to Nagasaki Station and then use the Nagasaki Tramway to go the rest of the way.

There are rental car desks at Nagasaki Airport for Nissan Rent-A-Car, Toyota Rent-A-Car, Nippon Rent-A-Car, Orix Rent-A-Car and the more cheapo (and foreigner) friendly Times Car Rental. Note that you will need to get an ETC card (for automatic toll charging) or a few thousand yen in coins as there are lots of toll roads in Nagasaki Prefecture and they aren’t cheap!

You don’t need a rental car for getting around within Nagasaki City. Many places of interest are walkable and the Nagasaki Tramway and municipal bus system are excellent. Also, you don’t want to head the wrong way down a one-way street with a tram barreling towards you!

As with most airports in Japan, catching a taxi from the airport to the city is not really an economical option. The trip will cost approximately ¥12,000 yen and take up to 1 hour.

There are no ferries that go directly to Nagasaki City from the Airport. As mentioned, there are ferries that go to Huis ten Bosch and Togitsu, located to the north of Nagasaki City. Once you arrive at Togitsu, Nagasaki City is still another 20 to 30 minutes by car – so the only reason to take this route is if you want to have the experience of cruising Omura Bay. Ferries for Togitsu leave from the airport every 45 to 50 minutes and the cost is ¥1,400 for adults and ¥700 for children. The trip takes 25 minutes.

The closest railway train station is Suwa Station in Omura, which is about a 20-minute taxi ride from the airport. Since the train takes longer than the bus, there’s really no reason to consider this option.