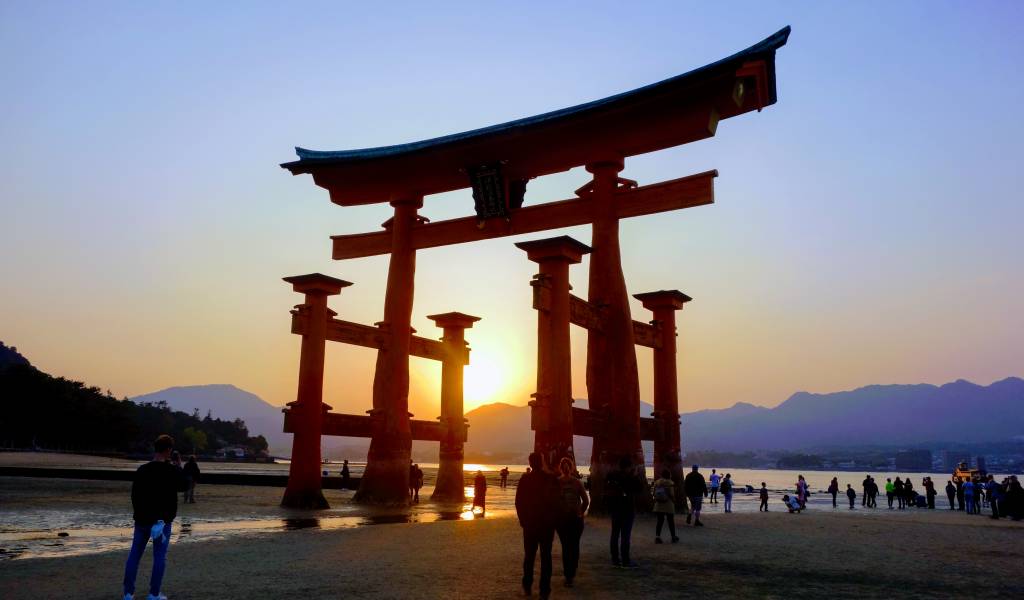 One of the most famous sites in Japan, the floating shrine of Itsukushima (popularly known as Miyajima) is unmissable—but there’s plenty more to see on the island!

No trip to Kansai is complete without a trip to Miyajima, and although the floating torii gate is top of the list, there are plenty of beautiful sights on the island. A great place to escape back to nature, you can enjoy the different hiking routes and forest trails, visit stunning shrines and temples and stroll through the shopping streets for a day you won’t forget. Although the island is actually called Itsukushima, it is well known as Miyajima, which translates to Shrine Island and is famed for cherry blossom and especially autumn leaves. Only half an hour from Hiroshima, the island is perfect for a day trip, but if you can stay overnight, you can enjoy the island at its quietest and even the sunrise in the morning (as no boats arrive in time). To make the most of your time in Miyajima we suggest arriving by mid-morning so that you can see the shrine both at high and low tide, at the start and end of your day.

After stepping off the ferry, you will see some friendly deer and find your way strolling through the Omotesando shopping arcade, lined with souvenir shops, cafes, and even frsh-oyster stalls. The shops sell everything from traditional crafts to cute trinkets and is a great place to pick up your gifts. The street is famed for its giant rice paddle. Crafted from an ancient zelkova tree, it is over 7 m long and almost 3 m thick. Apparently inspired by a dream of Benzaiten playing a lute, Buddhist monk Seishin carved a wooden rice paddle and taught the people of the island how to make them. Now you can admire a giant one, buy medium-sized ones and even have your caricature painted on one if you like.

Some of the nicest treats to try are momiji manju, a maple-leaf-shaped cake with red-bean paste inside (there are a few other fillings these days, including custard and chocolate). They were originally made by hand but are now made by impressive machines that you can see in action through the shop windows. They make great gifts, but you can also try them fresh—the best way to do this is deep fried and on a stick from one of the shops along the way.

Around the corner is Machiya Street, an old fashioned row of 1950s style shops and cafes—perfect if you need a pick-me-up or a break from walking.

Pagodas and palm trees don’t often go together, but here this surreal bonus is yet another feather in Miyajima’s photogenic cap. Just behind Itsukushima Shrine, the pagoda and accompanying hall are hard to miss, with five stories of height and a hall the size of a thousand tatami mats. Dating back to 1587, Senjokaku Hall was never fully finished after being commissioned for chanting Buddhist sutras for fallen soldiers and is surprisingly sparse.

With no real entrance or finished ceilings, it has an abandoned feel in complete contrast to the colorful pagoda which actually predates it.

Forever playing second fiddle to Itsukushima, Daishoin is a beautiful temple with plenty of buildings to explore and hat-wearing Buddhas to admire. Sitting slightly higher up the island with great views of the bay, the temple is one of the most prestigious of the Shingon sect in western Japan. With close links to the Imperial Family and visits from Emperor Meiji, the temple has long been a prestigious site, with Kobo Daishi, the founder of the Shingon Sect, enshrined here. Exploring the different buildings will lead you to many unusual sites, like the 500 rakan statues all with unique facial expressions (and many with knitted hats) and the 1000 fudo images.

There are countless collections of deities and disciples surrounding the different areas, all with their own unique charm. The Niomon Gate is particularly spectacular as is the Maniden Hall, where prayers are accompanied by a taiko drum each day. On your way up the stairs be sure to spin the prayer wheels for blessings equivalent to reading a volume of the Heart Sutra! There is also a relaxing tea room to enjoy if you need a break.

The temple forms the start of the Daishoin Hiking trail to the summit of Mount Misen and it a great starting point, especially as the train offers great views of the bay and torii gate.

A shrine that needs no real introduction, Itsukushima floats above the sea on high tide and is one of the most famous sights in Japan. Having been worshiped for centuries, the area is well revered and in 1168 it was chosen to be the site of the clan family shrine by Taira no Kiyomori—the most powerful man in Japan at that time.

The shrine is now a national treasure and has a series of special features to help it survive the rising seas. Stone lanterns were used as weights to stop the corridors rising, no nails are used in the floorboard and small gaps remain to let water flow out. There are also three round ponds built into the ground around the shrine, once used for fires that started when the tide was low. These days the lanterns have been replaced with bronze versions, but you can still see the originals in the Treasure Hall.

The shrine has a purification hall, high stage for dance performances, corridors, arched bridges, three shrines and the only Noh stage in the country that rests on the sea. The main shrine is dedicated to three Munakata goddesses with the style dating back to the Nara period.

The shrine is illuminated at night, but cannot be entered after sunset. Entry costs ¥300 or ¥500 if you want to visit the treasure hall as well.

The Great Torii Gate is accessible from the bay itself, with incredible views from the surrounding areas. The first giant torii was built in 1168 with 7 successors through the years. The current one, made from natural camphor tree and standing 16.6 m tall, was built in 1875.

At low tide you can walk out to see the shrine and try to throw a coin into the arches for good luck, and admire the view from up close. There are often deer strolling around and a small river with stepping stones which offers a great viewpoint to the gate.

The gate is illuminated from sunset, and if you can stay on the island, or at least wait until one of the later boats, the view as the tide comes back in is truly beautiful.

There are three main hiking trails up Mount Misen, with a cable car if you’re short on time. The first two trails take you through the primeval forest, with giant rocks and ancient trees creating a cool escape from the heat before meeting at the Misen Hondo, a short distance from the summit.

Great for seeing the autumn leaves, the Momijidani route takes 1.5–2 hours, with a distance of 2.5 km. The route follows the river and is the shortest of the trails, with some of the most beautiful scenery.

The Daisho-in trail is a little longer, at 3 km, with a waterfall and a host of Buddha statues along the 2000-step route.

The longest of them all is the Omoto route (3.2 km), which starts at Omoto Shrine on the far side of the bay and joins with the Daishoin route toward the top. You can stroll though century-old fir trees in Komaga Forest and see the Iwaya Taishi, the cave where Kobo Daishi, founder of the Shingon sect of Buddhism, once secluded himself. This route has a few more risks, so do be careful and make sure you have the correct starting point as there have been accidents recently.

The mountain itself has plenty of interesting spots along with plenty of statues and rocks along the paths, as well as the incredible views.

The cable car departs from Momijidani Station and takes you to Shishiiwa Observatory, where you can enjoy incredible views across the bay. From there, there is a suggested 1-hour walking route which includes the Misenhondo Shrine and eternal flame, Dainichido Hall, the mountain summit and the Kannondo Hall, among other smaller sights along the route.

The ropeway has a great little map for the primary sights here, so you can pick and choose what you would like to see. The ropeway costs ¥1,010 one-way or ¥1,840 return, running between 9 am and 4 pm, with some seasonal changes.

If you’re happy strolling in nature, there are two great nature paths you can take to explore the natural scenery of the island. From Momijidani Park, you can walk about 750 m to Daishoin Temple with great views of the five-story pagoda and Itsukushima Shrine on the Momijidani route (obviously great in autumn).

Alternatively, the Uguisu route is almost 2 km and takes you from the residential area, through the forest, and to the ropeway stop, with plenty of cherry blossoms if you go in spring.

The Asebi walking path follows the route from Omoto Park to Daishoin and also has great cherry blossom viewing, whereas the Tsutsumigaura route connects Momiji Dani and Tsutsumigaura, taking you through the forest.

There are plenty of ceremonies and rituals that take place on the island throughout the year, with some drawing incredible crowds.

The Kangen-sai in August is one of Japan’s three major boat festivals and the biggest held at Itsukushima throughout the year. It involves a ritual lantern greeting of boats, ceremonial music performances and spectacular views of the boats lit with firetorches arriving at the gate.

The Miyajima Fireworks Festival is held shortly after on August 26th with thousands of fireworks being set off behind the gate for incredible silhouettes across the bay.

The fire-walking ceremony, Hiwatarishiki, takes place at 11 am on the 15th of both April and November at Daishoin Temple. It features a purification ceremony and firewalking by monks and worshippers.

The fire prevention festival,Chinkasai takes place in the early evening on the final day of the year, with people burning homemade torches and giant ones in front of Itsukushima Shrine.

If you’re a fan of oysters, the best time to visit is during the second weekend of February for the low-price oyster-selling celebration.

There are plenty of smaller events too to keep an eye out for on your visit, including the Memorial Service for Kitchen Knives as well as national festivals like Setsubun and the Hina Doll Festival.

You can take the JR Sanyo Line from Hiroshima to Miyajimaguchi Station. The train is ¥420 and is covered by the JR Pass. Alternatively, you can take the Route 2 streetcar from the city center. The streetcar option is slightly cheaper at ¥270, but does take a little longer. From Miyajimaguchi Station, you can take either of the ferries, both costing ¥180 and taking 10 minutes. Catch the soonest one, or the JR ferry if you are using a JR Pass.

Alternatively, you can take a boat from Hiroshima Peace Park which is ¥2,200 one-way or ¥4,000 for a return journey.

Hiroshima
Written by: Lily Crossley-Baxter
Filed under: Things to Do
Tags:
Sharing