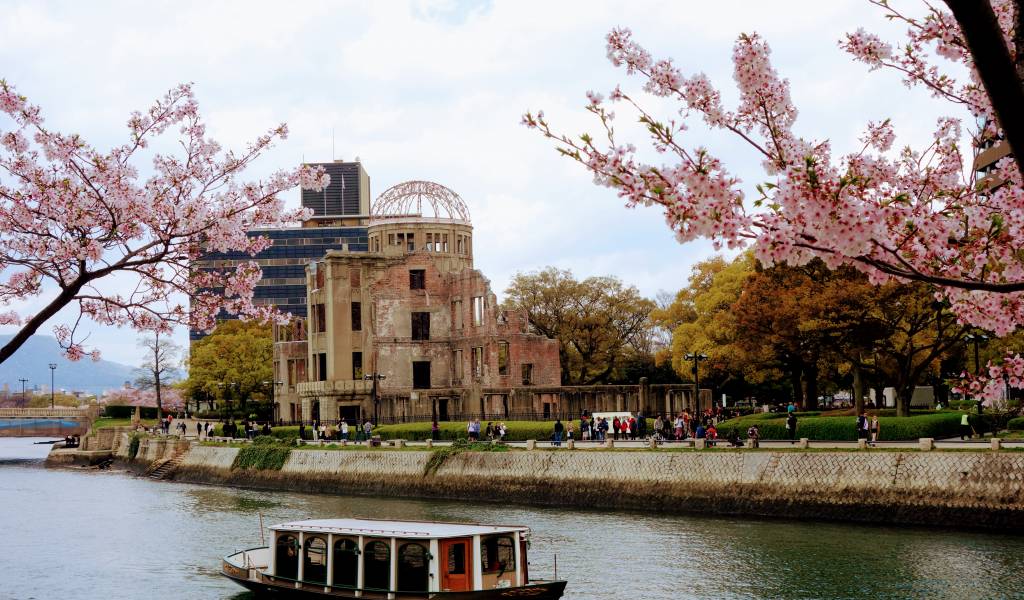 A Day in Hiroshima: A Guide on What to Do, See and Eat

Hiroshima is known for one thing, and is on most people’s Japan itinerary—but besides visiting the museums, what can you do there? Our Hiroshima guide will outline all that there is to do, see and eat for a full day of discovery.

While Hiroshima’s history is an important part of the city’s memory and legacy, it is also a place of renewal and beauty. No doubt it will be on your list if you’re traveling in Kansai, and so it should be. But in addition to the memorials to the atrocities of the past, there are plenty of things to enjoy as well as learn from. Only 1 hour and 20 minutes from Osaka by bullet train (or 4 hours from Tokyo), Hiroshima is the perfect day/overnight trip, and the perfect double-day trip when combined with nearby Miyajima. Allowing for personal preference, it seems to suit Hiroshima’s legacy to start with the museum and memorial, followed by the beautiful gardens and natural beauty which has re-grown.

Unusual for a city, the transport in Hiroshima can be as much a part of the experience as the intended things. Be it old-school tram or pleasant cycle, you can travel with ease. Since Hiroshima collects all the retired trams from across Japan, there is quite a miss-match of vehicles trundling along the streets, from old-fashioned traditional to the shiny modern ones.

The handy thing here is that the Inner-City Lines (so trams on lines 1,3,5,6,7, and 8) are all flat-rate fares of ¥160. This is also true up to the Hiroden-nishi-Hiroshima Station on Line 2 from Hiroshima Station. The Hakushima line has a ¥110 flat rate and both the Miyajima line and Inner-City to the Miyajima line have zone-based fares of between ¥120 to ¥210 and ¥170 to ¥260 respectively.

Another handy bonus is that you do not need to buy tickets in advance, you simply hop on and grab a ticket if on a zone-based tram, or scan your IC card—and if paying cash on a flat-rate tram just take a seat. When getting off you pay by cash (with or without a ticket) or scan your IC card again. There are change machines on board as well as charge machines for IC cards so try to do this before you reach your stop. There is also an option for a day-pass ticket which costs ¥600 or a combined streetcar and Miyajima ferry day pass for ¥840. You can purchase these passes from streetcar conductors and drivers, the Streetcar Information Desk at Hiroshima Station (by the departure platform) or at major hotels.

Alternatively, you could rent a bike as Hiroshima is perfect cycling territory and has a community cycle system with docking points across the city. You simply pick up a day pass and then are free to collect and drop off bikes at any docks in the city. You can use the service as a guest or member. While one-day use is ¥1,000 for both, as a member you can also use the one-trip rate of ¥100 per 30 minutes or ¥2,000 for a month of use. The passes are sold at numerous shops and hotels displayed on the map here.

The most iconic image of Hiroshima’s legacy, the Atomic Bomb Dome stands tall by the river, the carefully preserved shell of an originally glorious building. As the symbol of peace, the building was designed by a Czech architect in 1915 due to the love affair with European architecture at the time. The Hiroshima Prefectural Industrial promotion hall was a thriving workplace holding events and expositions until it’s almost-complete destruction on August 6, 1945.

Pro tip: Gain a deeper understanding of Hiroshima’s history by booking a guided tour of these historic sites.

Both Fukuromachi and Honkawa Elementary Schools were close to the epicenter and played important roles before, on and after August 6th. While many students had been evacuated from Hiroshima, many had remained and junior high school students were tasked with helping demolition for fire lanes in the city. Unfortunately, this meant that at the time the bomb hit, they were just arriving for registration. With make-shift emergency treatment centers being formed within the remains of the buildings afterwards, they also became key places to those searching for family members.

These schools offer a smaller, more local piece of the story that day and in the aftermath, with scrawled messages searching for the missing on walls, and testimonials from those lucky enough to have survived inside. Although particularly difficult for anyone with experience working in Japanese schools, these are emotionally harrowing for anyone who visits, but also feature hope, with displays about the future and kindness also present.

Fukuromachi Museum is located in a small part of the surviving structure, with the original walls and staircase used for message writing, opposite windows facing the playground of the busy modern elementary school, which is both a jarring and comforting contrast. Both museums are free to enter.

The East Building and the Main Building are now open after a few years of extensive renovations. The museum is home to an astounding array of materials, displays, stories and photographs all dedicated to demonstrating the inhumanity of atomic weapons.

The new East Building has three parts: an introductory exhibit, “The Dangers of Nuclear Weapons” and “Hiroshima History”. There will also be sections in the basement displaying some of the exhibition pieces from the main building which focused on what happened in Hiroshima on August 6th. These include the New Arrivals exhibit, with pieces donated by families of survivors, and the Artifact Collection Exhibit. There are also video testimonials from survivors available with translation.

The museum is a harrowing and deeply upsetting experience, but is ultimately necessary and has been curated with the utmost care and consideration.

Once the busy downtown hub of the city, this now tranquil triangle was redesigned by Japanese Architect Kenzo Tange following its destruction. The park is home to a number of memorials and monuments as well as the museum but also aims to establish a focal point for the advocacy of world peace. The Memorial Cenotaph (below) bears the epitaph of “Let all the souls here rest in peace for we shall not repeat the evil,”and has a perfect view of the A-bomb dome. There are monuments to many specific groups of victims dotted around the park including one for Korean victims, certain schools as well as individuals who helped during the crisis.

The Children’s Peace Monument features a statue of Sadako Sasaki, who died aged 12 from the effects of radiation. She believed that if she folded 1000 cranes, she would survive, and to this day thousands of cranes are sent to Hiroshima to be placed at the memorial.

The Hall of Remembrance is a calming underground room with panoramic photographs of the city from the viewpoint of the hypocenter of Shima Hospital. The walls of the room use approximately 140,000 tiles to create the images, one for each of the victims estimated to have died by the end of 1945. The basin in the center is designed to show the time of detonation and offers water to the souls of those who died craving it.

Enjoy the view from Hiroshima Castle

Rather than being built atop a hill or mountain, Hiroshima Castle, aka Carp Castle, is located right in the center of the city, with stunning views from its top floor. Having been spared the wrath of the Meiji demolition, which destroyed many other castles, it was later destroyed by the atomic bomb, and restored in 1958 to its current form.

The inside is filled with the history of the city, castle and samurai culture across 5 floors with English information provided, but fading as you get higher up, oddly. The castle grounds have a shrine with entwined fish for hopes of finding your perfect lover, as well as numerous ruins and  more recently rebuilt structures from the Ninomaru (second circle of defence). The gardens are great for a stroll and are free, although entry to the main castle keep is ¥370.

Soak in the scenes of Shukkei-en Garden

A garden of miniatures, Shukkeien was built in 1620 by Ueda Soko, a famous tea ceremony master, for the feudal lord Daimyo. Designed to contain an array of beautiful views, the name literally translates to ‘shrink scenery garden’ and contains small versions of valleys, forest streams, shrines and koi ponds—designed to make the relatively small garden feel much larger. Created in a circle-tour style, you can follow the paths with occasional detours and enjoy stumbling across new scenes, all independently beautiful.

The park is centered around a lake, with plum orchards, small teahouse-style buildings and just an endless supply of picturesque views. There is also a small tea garden where you can try traditional green tea and Japanese sweets in the perfect setting.

With a wide variety of cherry and plum blossom trees, the garden looks especially great in spring, but each season adds its own touch, so you’ll never be disappointed.

After a long day of walking, you will have worked up quite an appetite, and there’s nothing better than the local specialty of okonomiyaki. While there are plenty of great individual restaurants offering the dish, you can also head for the towering building that is home to 25 different ones!

The Hiroshima-style okonomiyaki involves a lot more layering than the Osaka version, and is more fun to watch. Because of the complex construction that takes place, you won’t be cooking it yourself, you’ll be seated along a full grill table and the chef will prepare it for you and slide it over. The restaurants all have English menus and some have vegetarian options too.

Pro tip: Enlist the help of a Hiroshima local to show you the best eateries.

Further reading: Tokyo to Hiroshima: 5 Ways to Get There

Hiroshima
Written by: Lily Crossley-Baxter
Filed under: Things to Do
Tags:
Sharing